How Safe is Zanzibar for Solo Female Traveller

Is Zanzibar safe for solo female travellers? This is the question I get into my inbox at least twice a week from our female readers. I was planning this post for a while, but to be honest, talking about safety is  very relative and also personal thing and depends on many factors including luck and personality of each traveller.

If you ask someone who spent a few days somewhere in a cozy resort, they will say it is super safe, but are these few days or maybe a week  on Zanzibar enough to make such strong absolute statements? As everywhere in the world, same applies for Zanzibar. Do people get robbed? Yes, but they also get robbed in Madrid or Toronto or anywhere else in the world.

As someone who spent at least two months  on Zanzibar each year in last six years I have seen a lot ( mob justice beating among locals) and heard even more scary stories from expats and local people. Some of the stories i have been told could easily get into ID Investigation channel, but all those crimes occur between locals, mostly out of jealousy, revenge and other conflicts.

It is not always rainbows and sunshines being solo female on Zanzibar, however if you  stay in hotels with security and use common sense, the chances are very low to have  bad experience as a solo female traveller on Zanzibar. As per my personal experience about safety on Zanzibar, I learned a lot in all these years and am religiously sticking to my own safety rules.

Safety of Solo Female Travellers on the Beaches of Zanzibar

Zanzibar has two sides. The touristy side of Zanzibar, and the side you experience when going more on local level. Being able to spend so much time on Zanzibar I dont stay in hotels, I usually co share an apartment with locals which is great way to avoid touristy vibes and experience local life. And sometimes I rent a place for my own.

I dont consider myself a tourist anymore the moment I step to Zanzibar, but more like an expat. A home away from home. However, living like this makes me more exposed in environment where there are no tourists. Zanzibar is small, people see and notice anything (maybe because they dont have television?) and word and gossip goes fast around.

With my recent experience, word about a white female living a lone in rented house spread so fast that after living alone for a week on remote plot in a beautiful newly built house with just  a couple of neighbours I never saw, bad people found out about me. What is better than a skinny female living alone? Great target for robbery in the middle of the night  a private house near the Bwejju beach.

I will not go into details about this incident, but believe me it was scary and left some traumatic consequences with which I am still dealing in the present. The lesson learned here is: nobody helped me, neighbours heard me screaming, but nobody actually helped. Afterwards I wanted to call the police, like I would do it at home, to report the crime.

I was strongly advised not to do so, since police is corrupted in this area and I could get into even more troubles. Apparently police works with criminals in this area and protects the perpetrators. Why nobody helped me? Later I was told, people know each other, and helping me would cause  trouble to anybody who would want to involve in this incident.

Great! So there is no 911 on Zanzibar. I am not saying the whole police is corrupted, but in my case, it turned out useless option. And I admit I was deeply disappointed for nobody helping me out in dangerous situation, but hearing the fact that people could have problems because of me I kind of understand.

This is just one of incidents I personally encountered. I had more luck than common sense and probably serious army of guardian angels on my side that night. I dont even want to think what could happen to me that night. 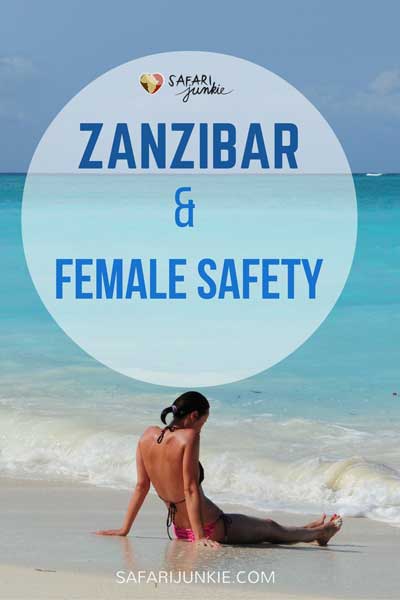 Writing about this is not about making you scared of Zanzibar, but I find it important that women are aware of possible threats. Of course, in my case I was not in a secured hotel, had no night guard and you can blame me I personally put myself into this situation. Being blinded by perfect location and low rental price I do admit did forgot about safety as I got too relaxed.

If you are renting property that is not hotel or lodge, make sure you ask around about the safety situation in the village you plan to be and make sure you have night guard – askari, if you can trust him of course.

And there are beach boys, the guys who will be selling you cheap tours or drugs or even hit on you. They are on general harmless and leave you alone when you let them know you dont need their services or help or whatever they are offering.

If you spend some time on a beach in Zanzibar (and almost every visitor does), be careful where you sit. A palm tree may provide some welcome shade, but a coconut landing on your head could cause major injury, possibly even death. Staff in some hotel were pretty vigilant in checking the trees regularly and picking any coconuts that appeared ready to drop.

When the tide goes out, there is a huge stretch of sand and rocks left bare which allows you to walk out to the edge of the reef. A lovely walk, barefoot in the sand, but beware! Firstly there are lots of  sea urchins, so barefoot isn’t a good idea!

Secondly, it is further than it looks. This means that, if you happen to be out as far as you can go when the tide turns, the water starts to get deep pretty quickly. Ok if you are a good swimmer, not so good if you’re not.

Zanzibar is majority Muslim population and with some proper outfit you can minimize attracting unwanted attention and cat calls by men on the streets.  You do not need to pack a burqa or niqab in your suitcase but dress modestly, specially in Stone Town and out of closed resorts.

By modestly I mean, cover your shoulders, dont show cleavage and no mini skirts or short pants exposing your legs up to your butt.  On the beaches no topless sun bathing and when going for a walk along the beach, its good to cover yourself in pareo.

If you are visiting Zanzibar during ramadan, make sure you are familiar with the ramadan etiquette. You can read about it in this post : Ramadan on Zanzibar

Stone Town is lovely town and if you are walking it alone, make sure you know your abouts. In the day light, apart from street vendors trying to sell you something or inviting you to their shops, you should be ok, while in the dark make sure you do not walk alone. Make sure someone escorts you to your hotel or take a taxi.

Personally I always use only taxi drivers by recommendation of other trusted expats or local friends I know for years.  Although the tourist side of Stone Town is very lively in the day, it becomes ghost city after 10 pm. Drink in moderation and keep an eye on your drinks  like you would anywhere else in the world in a foreign country.

Be vague about your place of stay. Sometimes a casual conversation will lead to a question about what hotel you are at, or where you are headed next. It’s wise to stay purposefully vague, or have a (faux) backup hotel or guesthouse in mind for those situations. I’m always wary of giving too much information about my whereabouts when traveling alone. This applies, of course, to men as well.

How do Expat Women Feel About Women Safety on Zanzibar

I asked two female expats  living on Zanzibar to write down their opinion about how safe is Zanzibar for female solo travellers and for advice for future female solo visitors to Zanzibar.

Sine, German expat living on Zanzibar for 6 years: Compared to other places, Zanzibar feels much safer, and in six years living here, I have never felt unsafe. Having said that, smaller incidences like muggings on beach or break ins have increased a bit as has the presence of drugs and what comes with it.

Nevertheless, for single female travellers, Zanzibar must be one of the safest options in Africa. Obviously, you will get some male attention, especially from the beach boys and Massais, but apart from that, you can relax.

Avoid deserted beach areas (try to have some hotels/guesthouses in sight) and when you go for a walk, leave your valuables at the hotel.

Please bear in mind the cultural differences – Europeans might be used to drunken girls, but to locals, this kind of behaviour can be seen as ‘loose’ and ‘immoral’. Even i you don’t mean to, they might see your drunken behaviour as an invitation to try it on and they can be persistent (although would not necessarily cross the line).

When you go to a party, don’t walk home alone – take a taxi or, if your hotel is within walking distance – ask one of the staff if there is someone to escort you home (maybe against a small token of gratitude).

Do not get tempted by drugs – the police might seem incompetent, but they know what is going on and can easily catch you. Just stick to the legal highs, please.

In Zanzibar I live with locals so I feel very comfortable every where after four years of living on Zanzibar.  My feeling  about safety is very positive also during  the night I dont mind walking on the beach alone  or in the streets when is dark. Anyway, my local friends are always afraid for me and suggest me to pay attention always and to avoid walking alone in darkness.
Zanzibari woman don’t go around alone during the night but also tourist are rare. In my short career in the tourist sector I met only one woman not afraid to go around alone like me, but all the others specially if they travelled alone asking me to go around with them so they can feel more safe.
I need to specify that safety depends by the area because in south east Zanzibar  there are places not so safe also during the day Paje, Bwejju, Jambiani)…where they can steal your phone and camera,  thats why I suggest over there to walk without bag and other technologies.
Hopefully this post revealed a little bit of behind the scenes of safety on Zanzibar. But on general as long as you come for short vacation, Zanzibar is safe if you take usual precautions and of course respect the culture and people.
By Nina Zara|2019-07-18T20:20:13+02:00August 22nd, 2016|Categories: Culture, Tanzania, Zanzibar|29 Comments