Should you Choose Air Tanzania on Your Next Vacation?

Lets be honest. Years ago and still in the present, Air Tanzania wasn’t exactly an airline to choose for travelling around the country.

Bad reputation from  the past is haunting them still in the present. You can read more about their history on Wikipedia.

When travellers look for Air Tanzania reviews online nowadays, the old reviews are negative and many dont know that Air Tanzania got a financial boost in 2016, bought new aircraft and offers competitive rates on Tanzanian air travel market.

Despite the good pricing model, many travellers are lost and sceptic due to bad reputation in previous years, and those who book flights with Air Tanzania, just take a leap of faith and hope for the best outcome.

I personally didn’t travel with them (yet), but have to admit when I was considering trip to Comoros, they were the only carrier flying out of Dar es Salaam, but horror reviews from the past I found online, made my change my mind immediately. Since we have a generous traveller Bruno who shared the review below, I would just comment on technical things, my observations as potential client.

If I compare website quality  and booking system of Air Tanzania, its pretty basic, and from my testing at the time of writing this, my guess would be, they dont invest in really talented developers.

SSL certificate is by Digicert which apparently is a plus for safety online.  I checked  desktop booking experience in  popular web browsers like Chrome, Mozilla Firefox and Safari (on Apple). All work well, except for Chrome which delivers messed up page on step two which doesn’t look encouraging to proceed with reservation. Mobile version on IOS in Safari and Chrome works ok. Still missing the apps!

If I put myself in the shoes of potential customer who is jiggling whether to book a flight with Air Tanzania or not, I get mixed feelings. Specially when looking Air Tanzania Facebook reviews by pissed off clients.

All complaints and 1 star reviews are tied to bad customer service, apparently ignoring customer emails, complaints  when something went wrong – like cancellations, delays, refunds. You can see more on their facebook page. 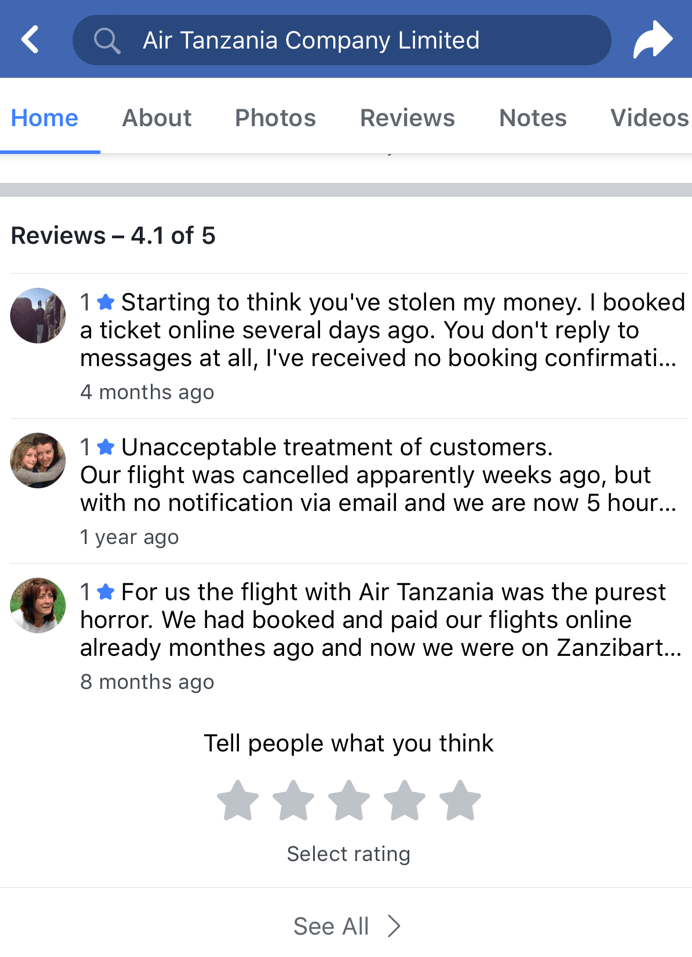 But apparently, despite all the rage from not happy clients, Air Tanzania prides them self on excellent customer service – source FB: 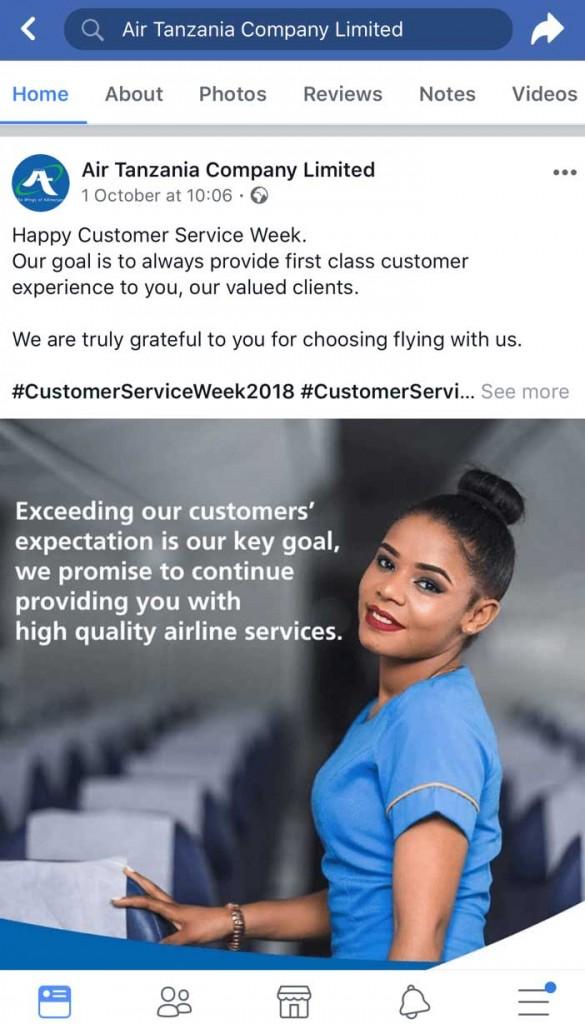 So, the fact that Air Tanzania is government owned, I am not surprised to see one star reviews as looks like they dont care about this aspect of business and are far away by “client comes first” mentality. Hope they invest in some  training of the staff. I did send them message on Facebook and surprise surprise, nobody got back to me (even though the message was seen by recipient).

Here it is, the bad and now  the better, the traveller who took a leap of faith and all went well for him!

I was never fond of flying, although it never stopped and never will stop me from getting to know as many countries and cultures as I can during my life on this beautiful planet. Now, getting straight to the topic of this Air Tanzania review. I flew from Brazil to Tanzania in June 2018. As to fulfil my chosen schedule, I had to pick some flights inside the aforementioned African country.

Before booking my flights with air Tanzania, I tried to gather as much information as possible about all the different Tanzanian airline companies, as I usually do.

Within that scope, I found out that, although Air Tanzania had a reasonably cheaper price compared to the other companies (Precision Air, Fast Jet, Coastal Aviation etc), I could not find enough information about it (of course, you can always rely on a few opinions in different online forums, but, for me, that was not good enough).

Having said that, I needed to decide whether to take a flight with an apparently not trustworthy and unknown company like Air Tanzania, only because it was, at least, twice as cheap as the other ones (to tell the truth, that’s quite a good reason to buy it).

So, what did I do? I bought not one, but two flight tickets with Air Tanzania (“The Wings of Kilimanjaro”) and, now, looking backwards, I must say that it was a fair choice. 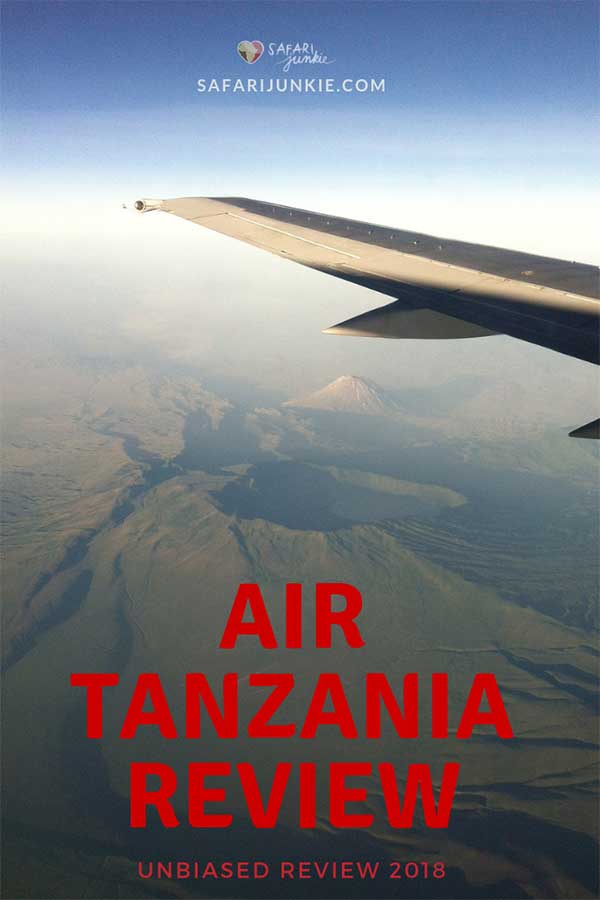 When you enter Air Tanzania website for the first time, you do not have a pleasing feeling (I get it!), because it has an ugly design and it is not user-friendly. I cannot be judgmental if that is the reason why someone gave up on buying a flight ticket with Air Tanzania.

However, as you select the flight and go forward, it gets quite intuitive. I mean, I had no problems with the booking online experience. You will see that when you finish the whole process, you will receive an e-mail from Air Tanzania with the online ticket details and the booking confirmation (over there you will find a link to print it and take it with you, if you are as organised as I am).

Flying With Air Tanzania from Kilimanjaro Airport to Zanzibar

My first flight was from Kilimanjaro to Zanzibar. It was a one-hour flight and it cost the total of U$ 87.90 (fees and one bag of 23 kg, included). If you are going to compare with other flight companies, I am quite sure it will be the best price.

Before booking it, I had read online that you must check the flight time before heading to the airport, because Air Tanzania could change it unexpectedly. For this reason, I checked it the day before the flight, for precaution, as to be assured that it was all in good shape. I had no problems with this matter either.

The check in was ok and I did it directly in the airport. As airports in Tanzania are not technological (actually, apart from Kilimanjaro Airport, my experience says that they are normally rustic, but fine), our boarding pass was handwritten.
The aircraft flew right on the scheduled time. I faced no delays. 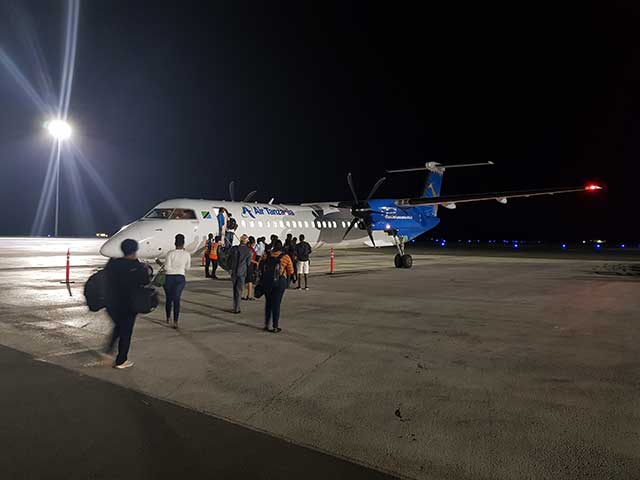 The aircraft looked newly bought and it was very neat inside. I am not an expert, but I would say that it was in a good state of conservation. The crew was very attentive, organized and all of them were wearing good-looking uniforms. When I asked about the flight duration, they promptly answered with a smile in their faces. Very good impression!

Even though the flight was short, they served free water and snacks. I was not expecting that, I must admit. I mean, the flight was much cheaper than the other ones and I had no problems with it.

When I arrived in Zanzibar Airport (not a very good one, I must say), the luggage was on the floor (I am sure they do not have many conveyor belts over there). They were all in good shape, so I took them and went straight to my hotel.

Flying With Air Tanzania from Zanzibar to Dar Airport

My second flight was from Zanzibar to Dar es Salaam. It was a 30-minutes flight and it cost the total of U$ 35.70 (fees and one bag of 23 kg, included). Good to know: it is the same price charged by the ferry companies. However, if you pick the ferry, it will take longer to arrive (about 01h30) and you will need to leave gorgeous Zanzibar earlier, because ferries do not sail at evening/night.

As in the first flight, I found the Air Tanzania aircraft conditions very good and the airline crew was friendly. The only difference this time: they did not serve free snacks or drinks this time.

In addition, the aircraft flew about 30 minutes before expected (that surprised me, by the way) and the flight itself had only a 20 minutes duration (not 30 minutes!). It was a funny and pleasing experience: as soon as the plane took off, they crew told us it was about to land in Dar es Salaam.

Overall, I would totally recommend flying with Air Tanzania. In my two-time experience, I can say that it was almost as good as Fast Jet (the other company I flew with) and it was much cheaper. Undoubtedly, the cost-benefit is worth it!

Travel review was kindly provided by traveller Bruno  Chacur, a corporate lawyer based in Rio de Janeiro and travel addict in his  free time. His ultimate goal is to explore and enjoy the world at its fullest, getting to know different cultures and savouring good local food. You can follow Bruno’s travel adventures on Instagram

There you have it! Would you book Air Tanzania? Let me know in the comments below! Would like to hear your experience, good or bad!