Wildebeest Migration In Tanzania and Kenya

The Most Spectacular Sight On The African Plains

It looks like chaos but great migration is shaped by some extraordinary behaviour. They are on the permanent quest for the rain and the fresh green grass that it brings. Since the African plains are always changing and the rains are unpredictable, wildebeest follow the rains in order to find enough food to survive. Herd upon herd they form a  mega herd of one and a quarter of million individuals.

No one knows what triggers the migration, there is no discernible signal, it just takes one to sniff the air and decide the time is right to leave. The wildebeests  journey is long and arduous one. Even without the attention of predators around 200000 of the weakest wildebeest and zebras will die from starvation and disease and over exertion during the trek.

Although internet is flooded with great migration fancy maps, you should know there is no firm schedule about the movement of wildebeest herds in Serengeti. The path is driven solely by instincts and weather conditions, rainfall, water stand and grazing conditions. 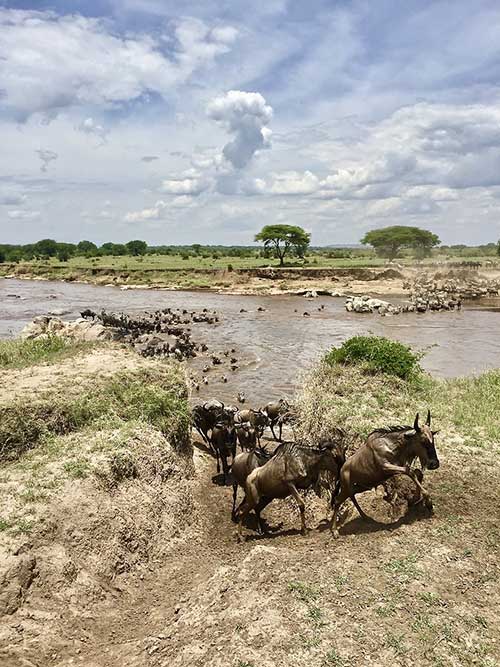 Wildebeest Migration In Tanzania and Kenya – February is Calving Season

Sometime between late January begins calving season and lasts about three weeks. During the calving period more than 400 000 little wildebeest are usually born.

Salei Plains and Southern Ndutu area are the best place to see wildebeest migration during January and March.

Southern Serengeti is one of out of four locations  where its possible to go on hot air balloon safari and observe amazing wildebeest migration from the air. It is definitely the perfect timing to book that hot air ballon flight and watch dotted plains full of wildlife.

There are many camps and lodges in the area, just to name a few:

Great Migration Between in April and May

Not Recommended Time to Go on WIldebeest Safari

Great Migration continues their journey in the search for  grassland. Herds are moving to west and north plains to the grassier plains and woodland of the Serengeti’s western Corridor In April and May rains in Tanzania are in full swing, roads are muddy or impassable and many safari camps are closed during this season.

Where to Stay In April And May – Wildebeest  Great Migration Safari

In case you do decide to give it a try during not so favorable months, you can stay in
There are many camps and lodges in the area, just to name a few:

In June the great migration herds continue the journey towards Grumeti River. Usually by July herds reach Grumeti river which is their first obstacle and for safari goers a spectacular yet dramatic event: many wildebeest will not survive the crossing due to drowning or being attacked by crocodile predators. If they survive lions are preying on the banks of the river.

Commonly from late July to mid October the wildebeest  herds will stay in n the northern Serengeti and  till late November in Masai Mara Triangle.

After crossing the Grumeti River great migration will head to Masai Mara Triangle and Lamai Wedge. On the way to Masai Mara there is another river to be crossed  – Masai Mara River and this is the time to book your wildebeest safari in Kenya.

Where to Stay From June to November – Wildebeest  Great Migration Safari

For viewing migration in June, check out these:

For migration viewing during July consider:

When Migration is in Mara plains we suggest the following camps and lodges: 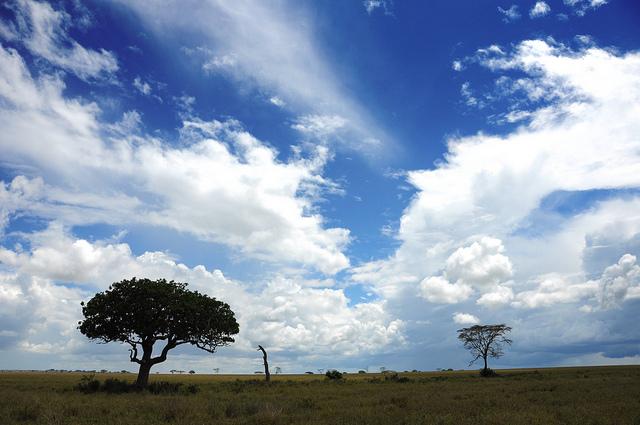 Choose the Right Time  and Place for Wildebeest Safari 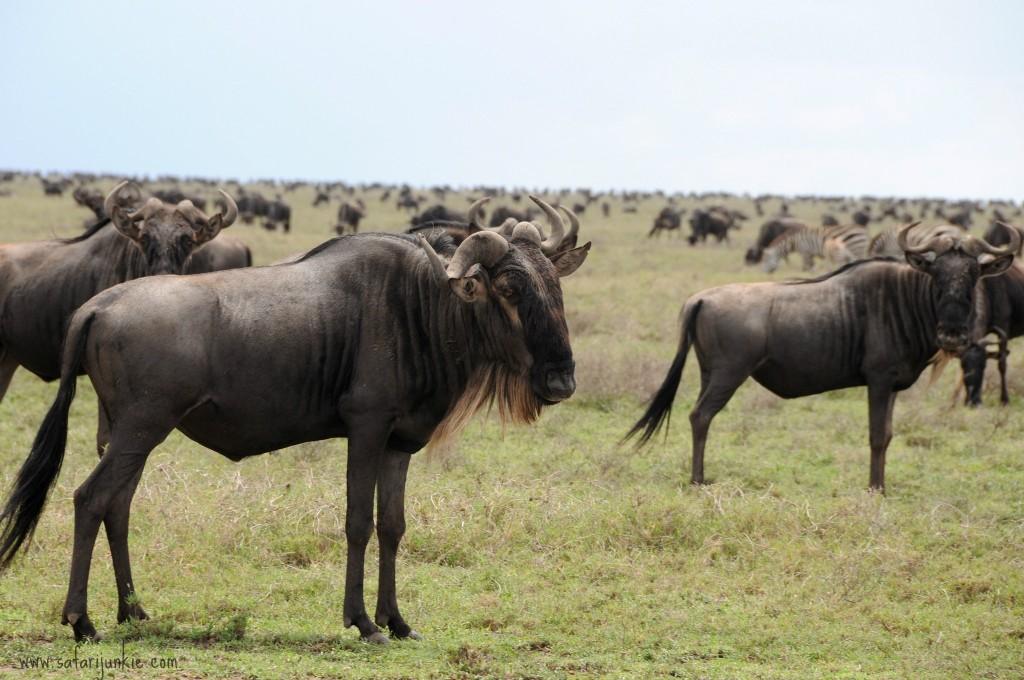 You have to know entrance fees are charged per 24 hours in Serengeti if you decide to spend a day there you will loose driving time, come there in late afternoon, in the morning you might have an early morning drive but then you will have to proceed back to next destination and all you will see of Serengeti is in the rushing car. 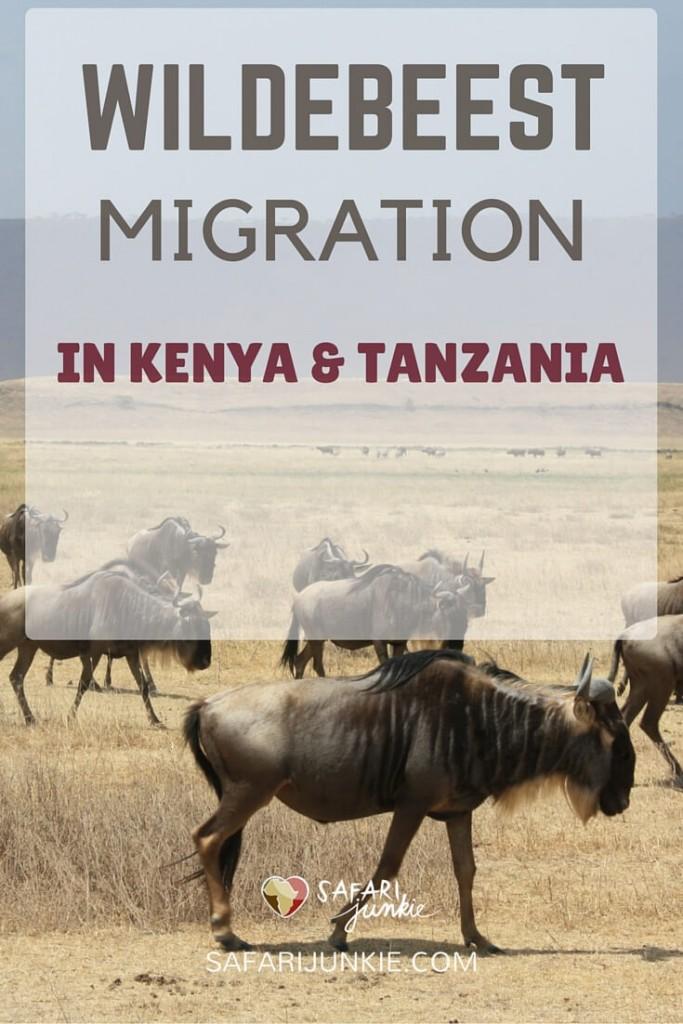 Go on Balloon Safari in Serengeti or Masai Mara

Yes,it comes with a price tag but you will probably be on safari only once in a lifetime! Book balloon safari in Serengeti or Massai Mara during wildebeest migration and you will be awarded with spectacular views of endless Serengeti panorama! Tours usually start early in the morning before sunrise (including with preparations) and end with a group breakfast in savannah.

During September and October  many properties drop  prices  up to 20 %. You might not see the best of great migration but still able to catch the herds on the way back to Tanzania.

Also read: What to pack for African Overland  Safari