The Longest Train Adventure in Africa

If you haven’t  heard of Iron Ore Train in Mauritania, its one of the longest trains in the world. The train length expands to 2,5 kilometers with 200 train cars carrying cca 85 tons of iron ore from mines in Zouerat to Mauritania’s second largest commercial centre Nouadihbou. Locals use it as means of transport while for foreign travellers iron ore ride is the the adventure of a lifetime. 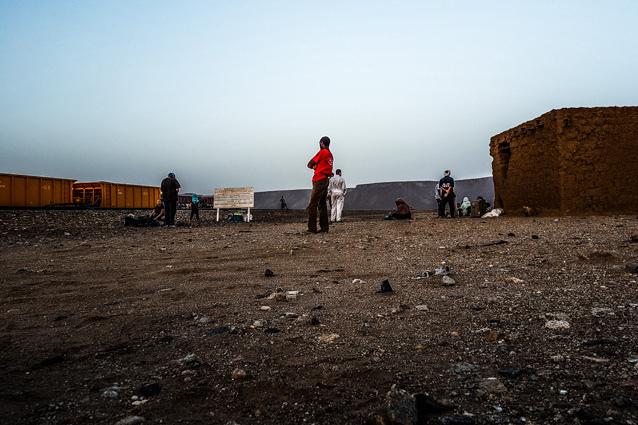 A bunch of people are standing by the small building in a tiny village Choum somewhere in the Mauritanian desert, as it is getting dark. Two kids selling cold water and Bisap just passed by a sign that warns about the dangers of crossing the nearby railway and seven other kids accompanied Josh, an Englishman I just met earlier this day in Atar, and me while we all wait for the longest train in the world to arrive. Suddenly, we can see bright lights approaching in the distance, people start rushing, Josh and I pick up our backpacks and then just admire the train while it’s stopping.

As it nearly stops, we realised, that we waited about 300m too far, with the passengers going on the passenger car. Therefore, we had to run in complete darkness towards the freight cars. Luckily we managed to get on the train on time.

A long sleepless night on the iron ore was followed by few more hours of ride through the beautiful desert scenery in the daylight. It wasn’t comfortable in first place, but I would do it again and I believe that there are still many adventurers out there, who would love to experience this, so I wrote a few tips on how to experience such a unique train ride. 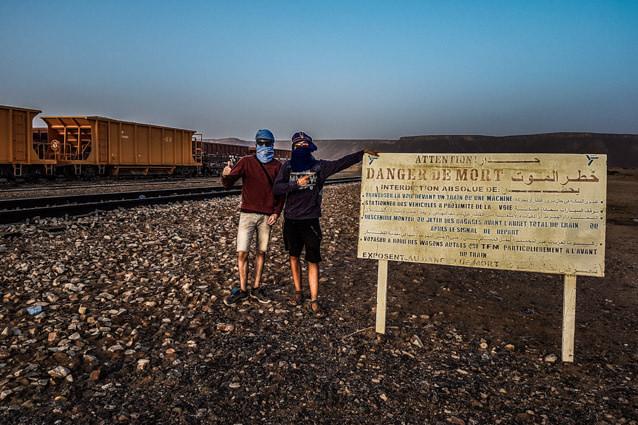 Preparation for the Ride With Iron Ore Train

While it is highly unlikely that anything serious will happen to you on Iron Ore train, you should be fully aware of the risk you take. Because the ride is free, you can imagine that your life is worth far less than the iron ore and even if the company running the railway would care about you, it is impossible for conductor to know that 3 kilometres behind someone fell of the train. But don’t worry, it is not so easy to fall off the train even when it is fully loaded. 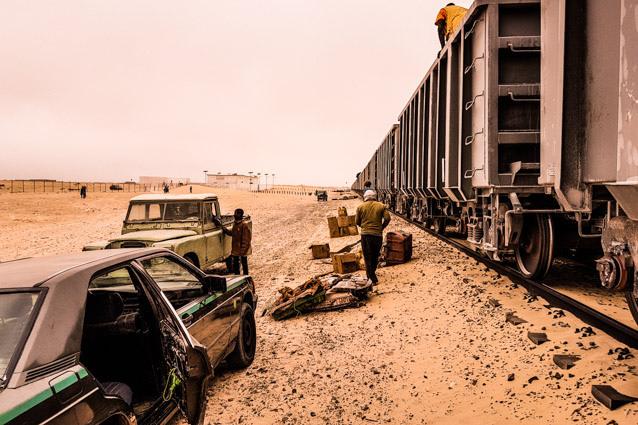 Keep in mind that there is a lot of dust, so take with you special clothes and shoes, you don’t mind getting dirty, which you will wear only on the train, because there is very little chance that you will find a washing machine in Mauritania and I can imagine, that removing dust off the clothes by hand can be pretty hard.

However, I was lucky enough to find one in Nouadhibou as Josh stayed in a hotel with laundry service, so I could wash the dust off there. Before you go on the train, get yourself a turban or scarf to cover your mouth and nose.

It can be bought in Mauritania for few euros. You should also cover your eyes and sunglasses work well in this case, though they don’t completely protect your eyes. Many travellers pack ski goggles for eye protection.

Iron Ore Train – Route Between From Choum to Nouadhibou

The Iron Ore train officially stops in three places, but, as you will notice, it actually stops several more times along the way. Mostly to let the other trains pass by, but it is totally possible to jump off the train there too, though it is not recommended, because another train might not stop there.

The official stops are in Nouadhibou, Choum and Zouerate. Foreigners mostly ride between Nouadhibou and Choum, since Zouerate is pretty far from everything and the only convenient way to get back from that town is by train.

In this article I will focus mainly on riding Iron Ore Train in Mauritania from Choum to Nouadhibou, because I did it that way. Furthermore, the train station in Nouadhibou is not hard to reach, so I would speak a bit more about hopping in in Choum.

Choum is a tiny settlement, established only because of the railway, so it lacks infrastructure. There are few food markets, selling only snacks and drinks, but everything is about two times more expensive there (even for locals). There is also a covered bus station, where you will spend the day, hidden from the sun, while waiting for the train. The locals may even prepare lunch and invite you to join them, as they did when  I was there. 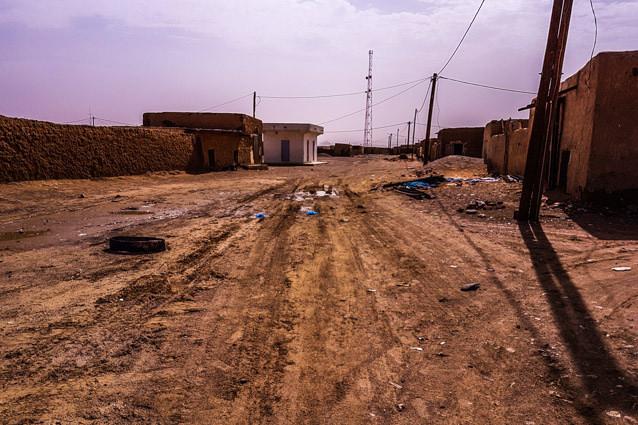 The easiest way to get to Choum from Atar is to take a daily bus for 2000 ouguiyas (as of August 2017) from one of the transport agencies in Atar. The ride takes approximately two hours and the bus leaves at around 10 a.m., but the leaving time may vary as nobody exactly knows when the train arrives in Choum.

In our case it was said that the train would arrive between 6 p.m. and 6 a.m., but it actually arrived at 9 p.m. Once the train is there you simply just hop on one of the cars. There are plenty to choose so you can be picky, but be careful, as the train leaves in about 5-10 minutes after it stops. The cars are equipped with ladder so it is easy to get in and out.

The Ride with Irone Ore Train

It’s dusty, it’s cold, it’s windy, it’s uncomfortable, but it is the most amazing thing I have done so far!  The train takes you through the remotest places of the Sahara Desert so you can imagine how bright the stars are there in the night and the milky way is clearly visible.

Even though the ride is bumpy you can still enjoy watching the night sky, because I can guarantee you that you will not get any sleep at all. In the daytime the ride is more enjoyable, since it is warm and you can watch the constantly changing scenery of endless desert as you move through it. You can even challenge yourself and try to find the other end of a train.

As said before, the train stops several times along the way, but it is highly unadvisable to leave your car even if you just need to empty your bladder, because the train can leave at any time and you together with your life are nothing compared to the iron ore for the railway company and Mauritanian economy. 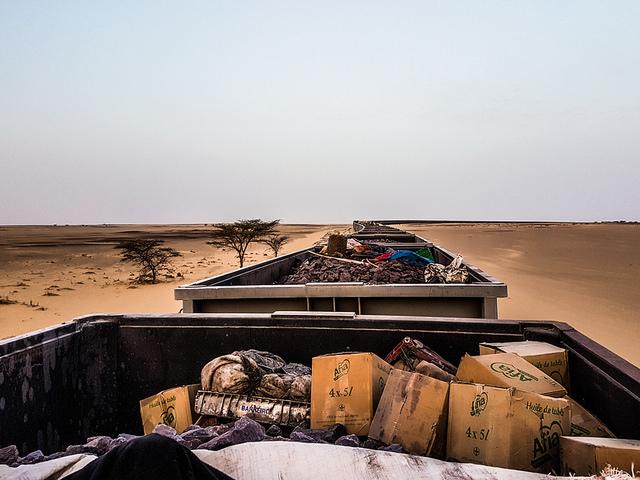 There is one more thing I would like to point out about the train ride. If you arrive to Nouadhibou by train, there will be a police checkpoint right after you get out. Be sure you know where you are staying the following night beforehand to avoid any problems.

Even if you will not have any place to stay by the time, just look up on the internet and tell them a name of random hotel in Nouadhibou and you should be fine. I had some problems explaining them, that I am staying with a CouchSurfer, just because I was foolish and did not look up for a name of a hotel in Nouadhibou before.

The prices in the article are still in old Mauritanian currency – Ougiyas. In 2018 Mauritania accepted new currency with exactly 10 times bigger value. This means that e.g. if it was said in the article, that the transport costs 2000 ougiyas, it should now cost 200 of the new currency. 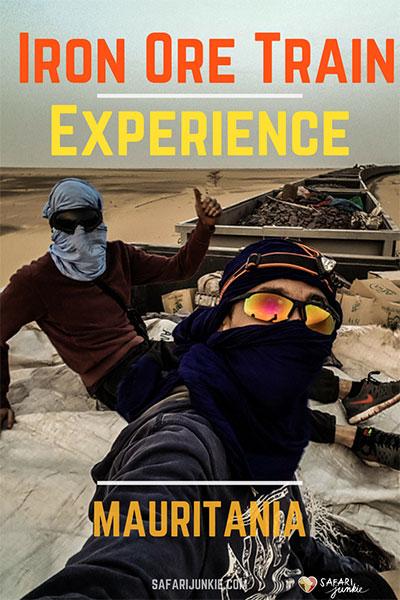 Written by: Žan Močnik: As a kid, he was always impressed by distant and exotic places. He visited several North African countries with his family in childhood, which was a base for adventurous spirit he possesses today. He set off on his first completely solo trip by the age of 18 and since then he always seeks for unusual places, daring adventures and challenging experiences all around the world. In 2017 Žan embarked on his second solo backpacking trip, this time from Senegal to Morocco, through some of the remotest parts of Sahara desert, where he spent almost whole time with hospitable and extremely generous people living in harsh environment with basic essentials. .  All photos in this post are copyright of  Žan. Visit his travel adventures on Instagram