Travelling from Senegal to Mali by Public Transport

Before heading all the way to Bamako, I had the plans to visit the family of some of my friends at home (Spain) in very tiny villages all over Senegal. So I took the bus in Tambacouda, Senegal but I know that the bus I took came all the way from Dakar. There’s at least 1 per day, but not with the same bus company, so I suggest to buy the ticket in advanced. You can also reach Tambacouda from Cassamance.

To buy the bus ticket, you ask until you find the garage of any of the bus companies heading to Bamako. I used AfricaTours but there’s at least another 10 bus companies with route to Bamako.

They may ask for your phone number so they can call you when the bus departure is nearing.

My tip is: first thing you do when you arrive by bus to any city, is to ask when is the bus to your next destination, and plan it from there, since you are already at the bus station.

Originally, I had planned to cross Mali through Kidira border, hoping to take the train in Kayes that would take me to Bamako. I confirm that as per October 2017, there’s no train Kayes – Bamako.

In my case, bus drove very fast. I left Tambacouda around 5 PM and reached the border at 5:00 am. I must admit that the border at night was a little scary. I had arranged my Mali visa before leaving Spain. Once at the border they didn’t asked any money, although I heard that I could’ve got my VISA at the border, this is not confirmed.

In Spain, my VISA was 70€ (+ 2 trips to Madrid), they said that at the border its 10€ for the VISA and 10€ for the policeman. The people that payed for their visa at Mali border had to pay in the different check-points while I didn’t had to pay anything. 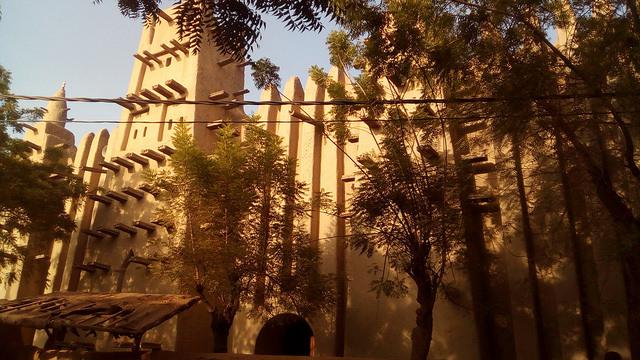 From the border, the route is straight forward to Bamako city. I arrived at 2 PM. Most companies have 2 garages, find a reference point of where is your hotel and ask for that reference point. Most people (including drivers) can’t read maps. Chances your Hotel is near the German embassy are very high and everybody knows where it is.

If I could go back, I would’ve got off the bus and try to stop by Bafing National park for a couple of days. We passed by it and nature I saw was amazing!

Breakdown costs of   bus from Tambacouda to Bamako Mali

Timing: Tambacouda 19:00 – Border 5:00 – Bamako 14:00 next day. Keep in mind that your times may vary depending on how long it takes your bus to go through every military control so delays might occour and trip to Bamako ends up longer than in my case.

Practical tip: ask for Bus garage – works better than asking for bus station for some reason.

After a very long bus ride from Tambacouda (Senegal) I arrived in Bamako.

Crossing the Niger River for the first time was exciting! Bamako city itself surprised in a good way. If compared to some other cities in Africa, its quite modern- except for the lack of ungrounded drains.

Very large roads with traffic lights and many lanes that cross the city in several directions and “megablocks” asphalted on the outside and without asphalting on the inside, which makes almost nobody ride inside, the kids play free on the street, people sell anything at the door of their houses drinking tea all day …

My favourite part was Bamako market. I spent most of my time there and loved it. People were not in hustling tourist mode. Most locals were curious about me, and even when I didn’t bought anything they were happy to invite me for a tea.

Note that after 6 Pm you should be already back to your hotel. The environment changes a lot between day and night and as soon as the night falls, most people seem to be rushing home.

As a solo female traveler in Bamako I had not a single issue to move around Bamako by bus or walking alone throughout the day. Mostly the bus fares around the Bamako city cost around 100 CFA (15 cents), water bags 50 CFA (more common than bottles of water)  and fresh watermelon 25 CFA.

Eating rice with sauce at any of the local food stands in the street was 200 CFA without meat (Yay for vegetarians!) and 500 CFA for meat meals.

On the bus ride from Tambacouda to Bamako I made friends with and they invited me to visit their homes. It was great to see the suburbs of Bamako and see local life. I was also safe there although I noticed that police was following my steps. 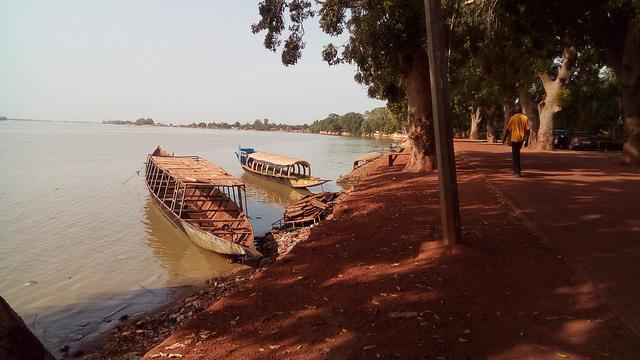 Only thing to note: their safety measures scared me a little bit the first time I got in, since you have to pass 2 doors and a metal scan before you can get in.

Travelling to Carrefour Djenne from Bamako

There’s several buses from Bamako to the Carrefour Djenne every day. Any bus going to Mopti will drop you there. In my case, I took the bus from Africa tours from 18:00 that left surprisingly on time.

I didn’t know at the time that the checkpoint from Djenne would be closed at that time, so everybody in my bus (and many buses and trucks going ahead of us) had to get off (that was around 2 am). Villagers come and offer you mats for rent for 200 CFA. People seemed calm so that calmed me down (Solo female traveler here). I found a mother with her children and slept near her.

Around 6 in the morning everybody is up and checkpoint starts operating again. In the crossing there are minibuses to Djenne. No schedule. Price was 1500 CFA. Ferry was included.

I stayed in “Village des Amies” a Hotel near the river, about 4 kms from Djenne. It was very peaceful and from there it was very easy to meet villagers since they also run a social project. Price was 5000 CFA per night.

To go to Djenne I “hitchiked”  the donkeys. But many people are willing to give you a ride in their motorbike. If that’s not your style you may prefer to stay inside the city, but it will not be as cheap.

Also, one thing to know about Djenne was the smell. It’s an ancient city with ancient sewage system, so I was very happy to sleep outside the city.

The city is small, easy to walk. Reminded me to Moroccan Medina. In the plaza in front of the Great Mosque  you will meet the few guys that speak English and that will want to offer you a tour. There are alsoso called guides that will take you to the Dogon villages for a more reasonable price.

In my case, army guys told me I couldn’t go to the Dogon Villages by myself (As per October 2017) because of the “Bandis Armés” – what in Europe we call Jiihadis. 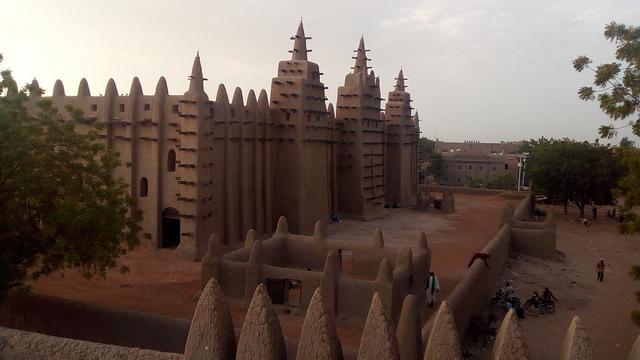 In my case, I ended up becoming friends with a Dogon girl my age and she brought me to her village – which was an amazing experience-. I regret a little bit I didn’t go to Bandiagara.

To leave theCarrefour Djenne, head to the square in front of the mosque, there will be mini vans waiting.  Same price. In the Carrefour just wait for a bus to leave towards Mopti or Bamako. I got on the 3rd bus that passed, only had to wait about 15 minutes. That was around 10 am. Ride to Mopti costs 1000 CFA.

In other days, Mopti was a touristic city that was an important stop in the way to the mysterious Timbuktu, still today, if you are not a possible AQM target, you can take a boat that will take 3 days until there.

But if you are a white-european-solo-female traveler like me you will have to head in the opposite direction. Just 1 week after I visit Mopti, AQM had attacked Severe, a city just 20 kms away.

I got here from the Djenne Carrefour. I can confirm that there are several buses going from Mopti to Bamako and back. Keep in mind that if you take a night bus, you might spend the night in the road due to check-points being closed. A bus from Bamako should be 10000 CFA. A bus from/to Bandiagara 1500 CFA and a bus from/to Djenne carrefour 1000 CFA.

Mopti was the first city where people did seem very desperate for the money. I met a UN worker that explained me that many people fled the violence,ended up homeless in Mopti. I only spent a day and a half in Mopti and was more than enough. Briefly visited market, walke around the great mosque and took a boat ride.

There’s still a few luxury hotels open and 1 budget hotel called Y’A Pas de Probleme Hotel. Night was 5000 CFA for the dorm and the staff was lovely (they also had private rooms). It’s close to the area where the bus companies are and the boats towards your next destination.Hotel had Air-condition, clean rooms and they even had toilet paper!

In my case, I decided to take a boat towards Segú, on my way back to Bamako. I had paid 10€ for the boat with “bed” included (which was just a mat on top of some wood with mosquito net). My boat left at 16:00 and arrived to Segú around 10:00 AM next day. The trip was lovely.

I did not do much sightseeing in Segú, since I had plans to continue towards Bamako. But again, Segú was super safe! From there I took a bus back to Bamako. I payed 2500 CFA. Left at around noon and arrived in Bamako at 14:30.

Natalia, born in Guatemala, At 24 has already backpacked 46 countries and counting. Loves learning different ways of understanding basic everyday things for different people around the globe. First phrase she learns in every language is “strong woman” and tries to find out it’s meaning for every culture she visits. Hopes you find information and courage in her words to go discover the world too.