Hanging Out With Hadza Tribe in Tanzania

If you plan to visit Hadza tribe in Lake Eyasi region in Tanzania, prepare for long, off road bumpy and dusty trip!

Although we started our trip from Karatu it was the most exhausting ride I have ever experienced in Africa so far. Tarmac roads disappear, roads turn into  dusty paths dotted  with small rocks and holes.  It was dry season, grass was burnt by the heat, nothing much to see on the way except for endless vastness of scenery. 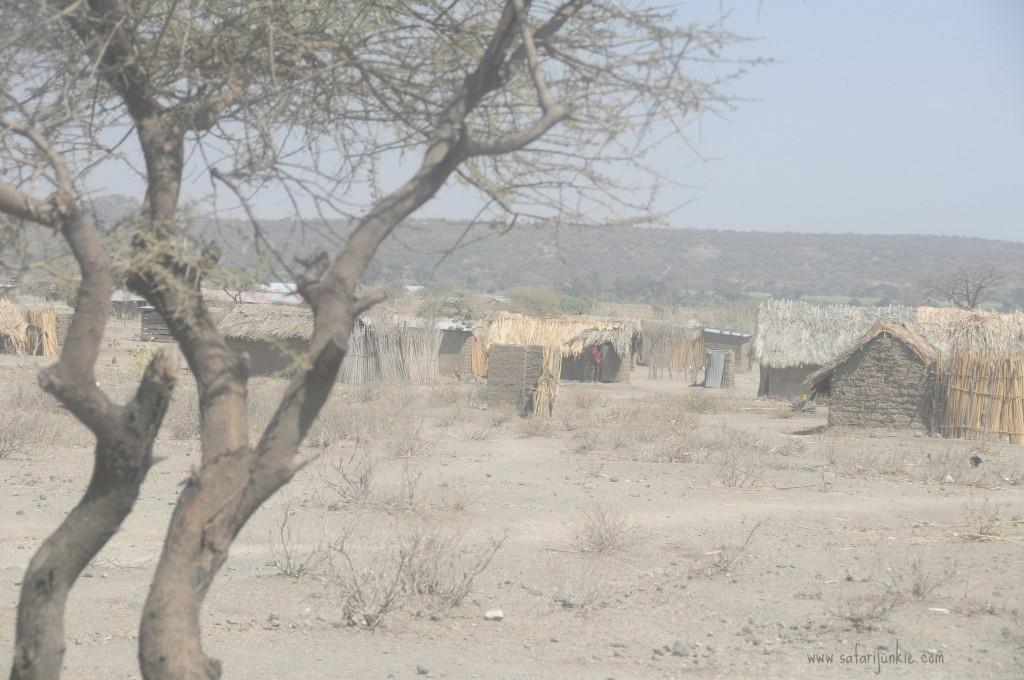 Dusty roadtrip – on the way to Hadza tribe

Every here and then we passed a small settlement, children were running after our car and they looked genuinely amused by our passing vehicle. Otherwise it felt like we were travelling somewhere in the middle of nowhere. A forgotten place. Scary and liberating all at once.

On the way  we stopped and picked up another guide who  was already waiting to join us in the jeep and was supposed to coordinate  the way to Hadza tribe.

After long six hours we finally arrived and parked the car under huge baobab tree. After a light hike through rocks and sun burnt bush we finally reached Hadza camp.

Of course, visit to Hadza people was part of my safari and tribe wasn’t surprised by our visit and bush was ornamented with handcrafts!

Womens corner under the bush with souvenir merchandising

It was a hot sunny day, I guess it had to be over 30 degrees C  and almost no shadow. I could actually merely call it settlement; few huts made out of tree branches and dried grass covered with animal skin.

Hadza men were gathered around the open fire, smoking pot and tobacco while women with babies were sitting just feet away in the shadows the bush minding their own business.  I felt a bit discriminated as  my male friend was warmly welcomed by Hadza men and I as a woman was ignored most of the time. 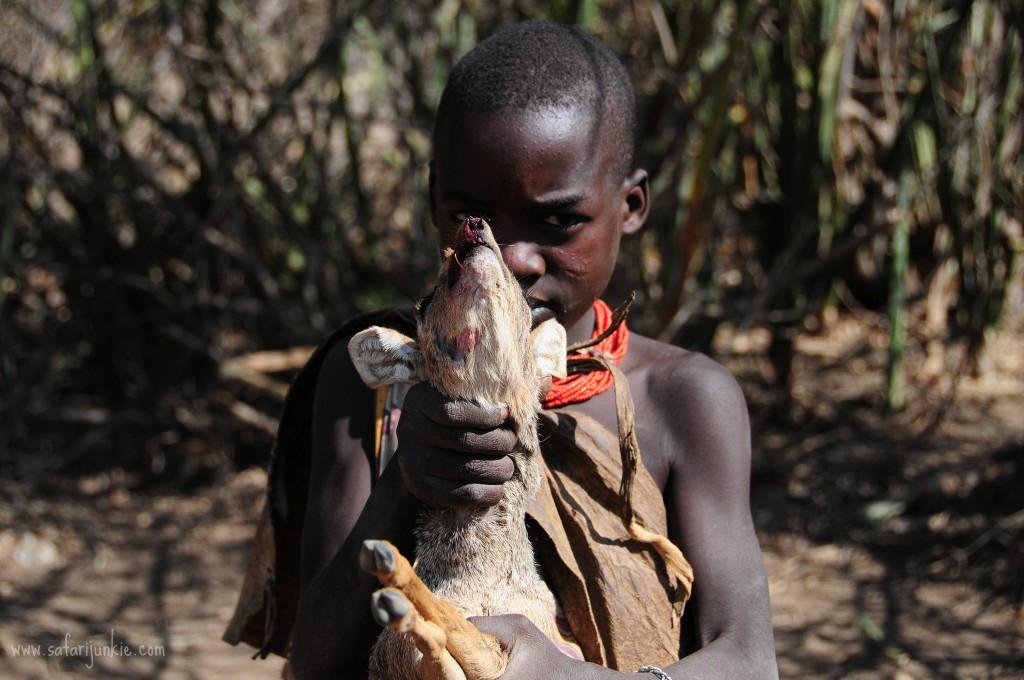 Catch of the day is dik dik!

Soon after our arrival to Hadza camp  younger boys started to skin little dik dik (small antelope) for lunch. We observed the lunch preparation which was quite difficult to watch from vegetarian perspective.

They lit the fire on grill with old fashioned way, and I finally was encouraged by chief to try to light the fire by rubbing a stick which turned out much more difficult than it looks! I don’t have to mention I didn’t join the lunch but after the lunch the leader invited my friend to teach him some hunting with bow and I joined to women in the shadows. in total we must have spent about three hours with Hadze group and afterwards we headed tocheck out Datoga tribe.

What can I say, visit to Hadza people is much more genuine than a visit to Maasai village for sure.  Although, visits to tribes have certain weird feel of human safari which I was not sure whether they were happy for me to be there or whether I was unwittingly taking part in exploitation. 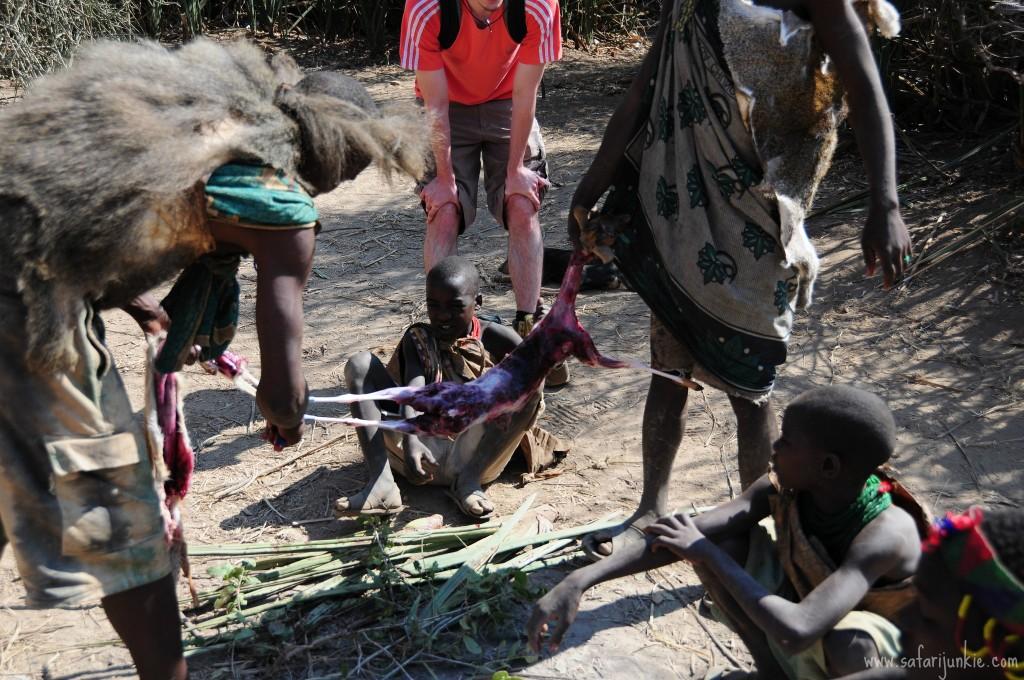 What I Learned on Visit to Hadza Tribe

The way the Hadze live is  amazing as well as shocking for someone coming from western  society filled  with comfort. I certainly envy them their freedom, a life where there is no obligations, no bills, no taxes and just  pure life from day to day basis in the search for food.

Although myself of course couldn’t live their way of life. Actually the Hadza life is one life lasting camping trip.  For most of all what fascinated me is their perception of death. When one of their own dies, there is not a lot of fuss about it. They dig a hole and place the body inside.

A generation ago, they didn’t even do that—they simply left a body out on the ground to be eaten by hyenas. There are no graves. There is no funeral. There’s no mourning of any sort. 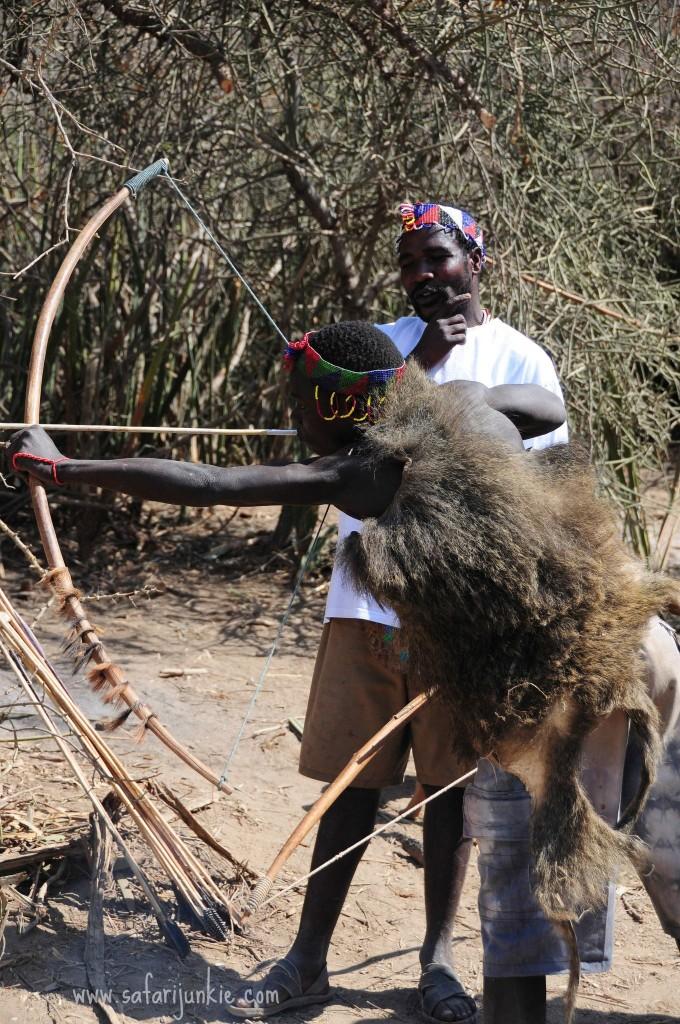 Showing off with hand made bow

If you feel like having a raw adventure on your next Tanzanian safari, Safari With Eyasi Tribe Visit is a must! 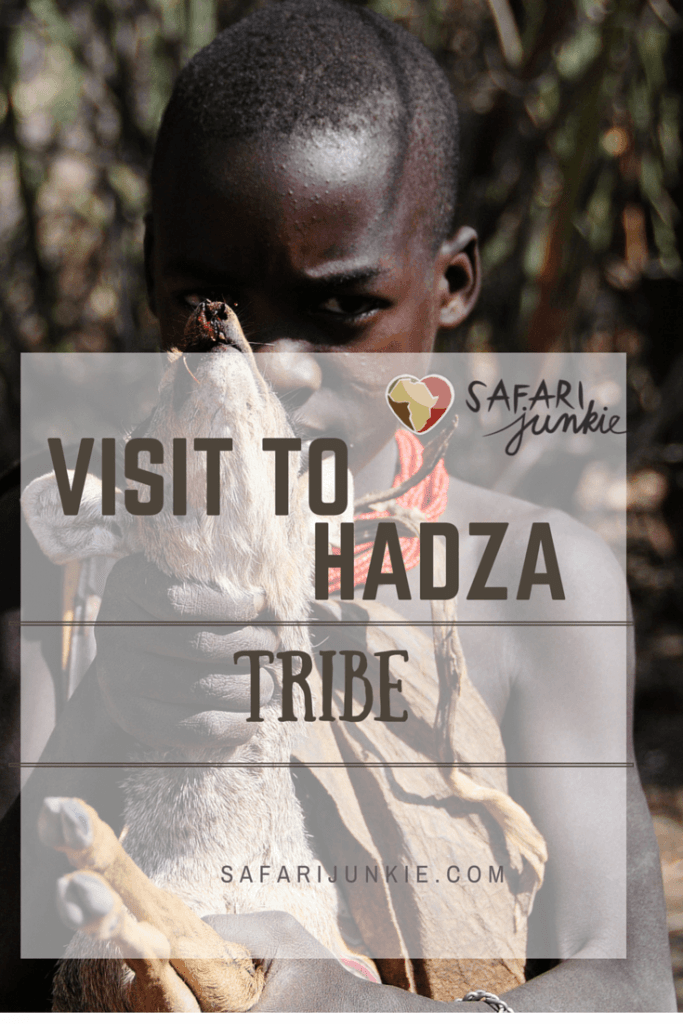