Masai people are probably one of the most known, famous and picturesque ethnic group in Africa. They are settled in spacious steppes of Kenya and northern Tanzania. They keep on loyalty of their tradition and there is much presented a romantic image of an »authentic African tribe«. Although, it has to be admitted that even Masai people nowadays succumb to the influence of Western world.

Due to establishing national parks, many Masai people have been evicted from their homelands. Those who still live there, are still practicing semi-nomadic way of life, just the same as they have been doing their ancestors many centuries ago.

Masai people, especially men, are known to be brave and proud. Apart from this, their feature is being tenacious warriors, wearing typical red checkered clothes, called kanga and holding spears or wooden sticks. To prove their strength and maturity, they jump in the air as a part of traditional dance.

Eunoto is at least ten days long lasting ceremony of young men, who are in a rite of becomings what Masai are supposed to be – warriors. Eunoto is just one of many Masai ceremonies, performed for different occasions, especially to denote someone’s passage from one life stage to another.

Eunoto is a boy’s transition into adulthood, and after this successfully passed ritual they become senior warriors and are now allowed to choose wives.

Women are also present at a ceremony, although they do not really participate in it – more or less they are only spectators. Women have their hair ochre painted and so do men – during Eunoto their ochre-stained hair have to be shaved. Men’s outfit during this ceremony is very colourful and rich. They are decked up with beaded jewellery and their bodies are decorated with white paint. 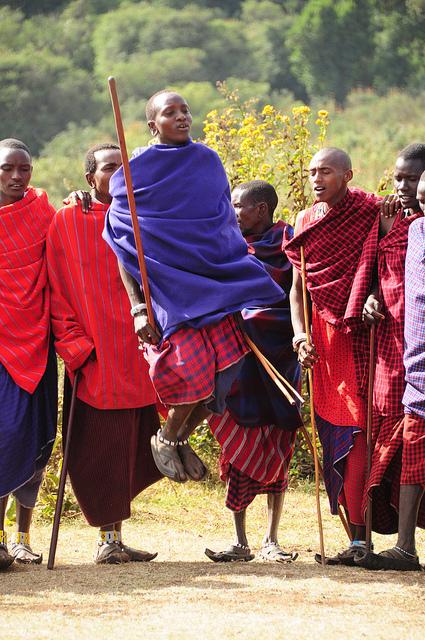 One very important and significant part of eunoto is adumu, traditional Masai jumping dance. For the performance of adumu, Masai men form a circle, one of them enters inside it and they jump. As high as possible, as smooth as possible, as elegant as possible.

Their bodies should stay a narrow pose and their feet should not touch the ground. The higher the jump is, stronger the guy is and, by all means, more of respect, admiration and desire he gets from women. So, obviously, Masai jumping dance dance is also a competitive dance. The highest jump can even be 80 centimeters high! Adumu literally means »to jump and down in a dance«.